If you’re interested in using machine learning (ML) on image and video datasets, then you might be interested in heaving a look on a relatively new project called OpenFace (first released in October 2015), with  Brandon Amos, Ludwiczuk Bartosz and Mahadev Satyanarayanan as authors.

TL;DR: For the impatient

Even though face recognition research has already started since the 1970s, it is still far from stagnant. The usual strategy for solving the problem has been divided into three main steps; given an image with a set of faces, first run face detection algorithm to isolate the faces from the rest, then preprocess this cropped part to reduce the high dimensionality, and finally classification. However, what makes this whole process so challenging is that many factors can create noise around this process, such as images can be taken from different angles, different lighting conditions, the face itself also suffers changes throughout time (for example due to age or style), etc.

Now one important fact to point out is that state of the art top performing algorithms are using convolutional neural networks. OpenFace is inspired by Facebook’s DeepFace and (mainly) Google’s FaceNet systems. The performance smack down that the authors present using the “Labeled Faces in the wild” dataset (LFW) for eveluation, and achieved some interesting results.

Another interesting point is that, as the authors state, the implementation is tuned for using the model in mobile devices, so the  “[…] key design consideration is a system that gives high accuracy with low training and prediction times“.

Note: In case you are wondering what’s the difference to OpenBiometrics (OpenBR). As stated by the authors of OpenFace in HackerNews, the main difference lies on the approach taken – deep convolutional networks – and could potentially be integrated into OpenBR’s pipeline.

As you might imagine (as any image/video processing package), dependencies are complex and time consuming, so prepare yourself for some dependencies troubleshooting in case your machine is still new to this world.

The project’s API is written in Python 2 – entry point here – given its dependencies on OpenCV and DLib. OpenCV provides the computer vision base, DLib enhances OpenCV face detection ability, numpy for matrix algebra operations and scikit-learn for classification operations.

For training the convolutional network openface uses Torch, Lua and Luajit which is written in Lua programming language. In this case, Torch allows the neural networks to be executed either in CPU or CUDA enabled GPUs.

The following illustration was extracted from the recent technical report “OpenFace: A general-purpose face recognition

library with mobile applications“, by the authors, and provides interesting insight: 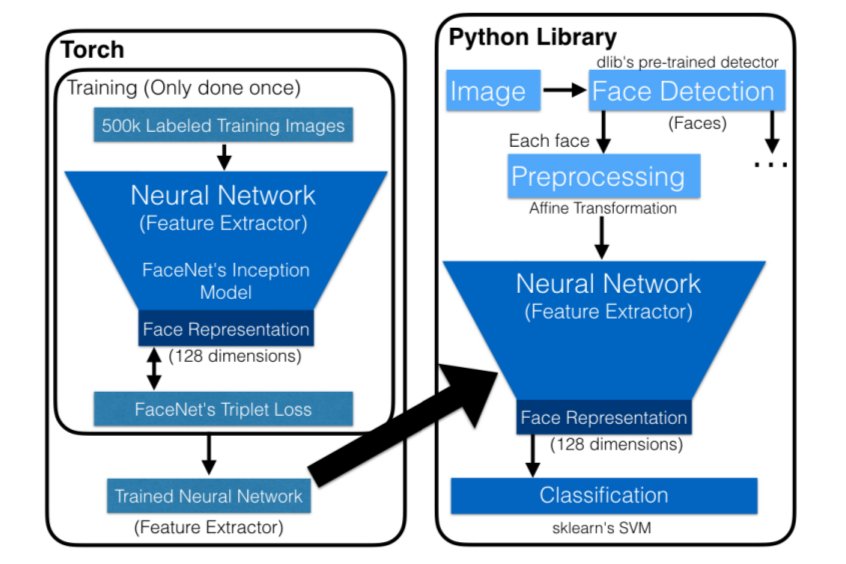 So important to note is that you do have the option to use already pretrained models (which use the CASIA-WebFace and FaceScrub databases) to help with face detection, which you can find in the models directory. The provided bash script downloads them.

Where to get started

To setup either locally or with Docker you can check the provided documentation.

Finally, you might also be interested in having a look at other projects using deep neural networks for face recognition:  Visual Geometry Group (VGG) Face Descriptor, and Lightened Convolutional Neural Networks (CNNs)

I'm a freelance Cloud & Big Data Engineer working in Europe. I blog about data related topics, from collecting and transforming massive amounts of data, real-time & distributed systems, to data science. Moreover, I also blog on how to set those same systems up, always with DevOps type of approach. Mainly I try to share learnings from behind the trenches that helped me and might also help others. In case you need help to kickstart or with a current data project, feel free to reach out on linkedIn: https://de.linkedin.com/in/diogoaurelio View all posts by Diogo Aurélio